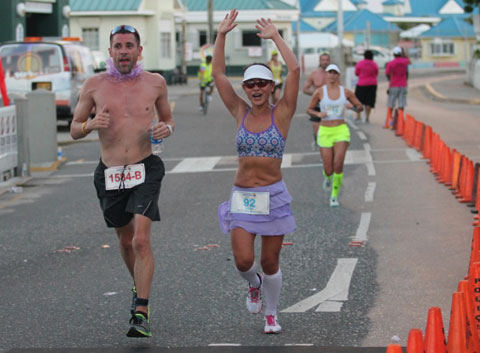 The 2013 Intertrust Cayman Islands Marathon was another successful event, resulting in a record-breaking 1,350 runners and some much-appreciated funding for such community organizations as the Cayman Islands Cadet Corps, the race’s main beneficiary.

The Cadet Corps used the money to assist a group of cadets who recently traveled to St. Catherine, Jamaica, to hike Blue Mountain.

Many participants in the marathon raise funds for nonprofit organizations they have chosen to support.

Last year, 60 people ran for the Red Cross, netting a couple of thousand dollars for that charity, and Derek Haines, who has raised hundreds of thousands over the years through the Cayman Marathon, raised more than $37,000 for Feed Our Future. Other popular charities supported include the Humane Society as well as the Cancer Society.

“The amount of the donations we give to the Cadets Corps and the Cancer Society is based on the amount of registrations received, so the more runners we get, the more money we are able to give,” explained Rhonda Kelly, race director. “We have been very fortunate to see the race grow by about 10 [percent] to 20 percent every year since its inception, and 2013 was another bumper year that included about 350 visitors from the USA, Canada and Europe.

“These are exciting times, and we are delighted to be able to share this achievement with these great organizations. We look forward to giving much more money to these charities in 2014 as the race continues to grow.”