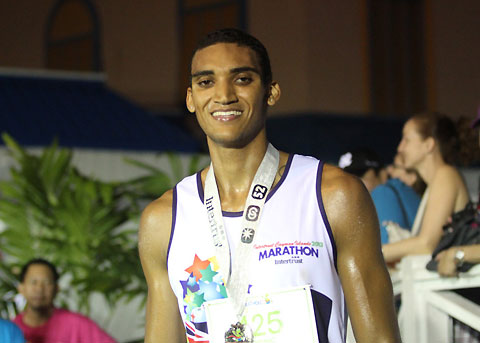 The Intertrust Cayman Islands Marathon generates the most excitement and mass participation of any sporting event here. Just post a few photos from the event on Facebook and watch the response to confirm.

The eleventh staging of the 26.2 mile race along with the half marathon, four-person relay and wheelchair event on Sunday from Breezes by the Bay proved that.

Walkers were welcome too for the half-marathon stretch and footballer Ian Roberton even pushed his baby round in a stroller for 13.1 miles.

Stories abound of keen runners from overseas being on island and hearing about the fantastic marathon here and signing up for a category. Promotion of the event at the Owen Roberts International Airport helped boost last-minute entries.

The half marathon was run from the harbor front in George Town, along South Sound, and then to Prospect Point and back. The full marathon was two leg-sapping loops along that same route, completed fastest by Justin Grunewald, whose wife Gabriele won the female half-marathon.

He hopes to be in the American marathon team for the next Olympics in 2016 and she is already a world-class 1,500 meters runner, who ran the tenth fastest in the world this year.

Justin won the 2011 race in a record 2 hours, 36 minutes, 24 seconds, but dropped out last year after 18 miles because of cramps and poor preparation.

He said, “It was very satisfying winning again. I ran the first half with Gabriele. The pace was a little too slow to get the record.

“The event was awesome again. Seeing the sunrise on the second loop is the best thing in the world. It’s a little warm but it’s breath-taking.”

The Grunewalds live in Minnesota where the temperature is around 19 degrees Fahrenheit, compared to Cayman’s high 80s.

Justin, 28, has a Cayman connection because his brother Matt lives here. Apart from enjoying the delights of Grand Cayman nightlife, bars and restaurants, entering the marathon is a bonus.

The Grunewalds married two months ago, so this was a romantic break for them.

“The water stops here are better than anywhere in the world,” he said. “Gabriele wanted to set the half marathon record (which she did).”

She said, “I’ve heard of your Cayman Invitational and would love to come, but it’s in May, a bad time to fit into my season’s schedule.

“I do a long run once a week, even though I train for 1,500 meters, but this fitted in perfectly with my long run. I tried to run at a good pace in a great event.

“From what Justin has said, it seems like it’s growing every year and it’s awesome to see people here who are actively running. Everywhere I travel, I try to find the local running community so it’s really special to see that here.”

She said she would like to run a marathon one day but, at 27, she is not yet ready.

Paralympian Brian Siemann was in the half marathon by himself in the wheelchair division because Ryan Chalmers pulled out through illness.

More than 1,300 participated in total, the highest number so far in the marathon’s eleventh staging. Team Diabetes from Canada had a huge presence again, pulling in 89 runners, as well as a raft of supporters. There were 250 children in the kids fun race too.

Welshman Speirs always comes from Virginia with Scottish wife Ally who runs the half.

Fastest woman in the marathon was Doan Pham from Houston in 3:42:51, who was seventh overall. Beth Florek, who had won it the previous five times, is around 30 minutes faster than Pham but with her first child due at the end of January, she had to rely on husband Dan to carry the Florek torch this time.

Chadwick Webster was third in the marathon in 3:05:02, an excellent time for his debut in the big run. Another runner happy with her time was Justine Plenkiewicz, who was twelfth overall in 3:47:19, her best by a couple of minutes.

In the half-marathon, Dominic Corbin (1:21:06) overcame knee injury to beat perennial champ Marius Acker. They were split by Gabriele Grunewald, who was second-fastest overall in the half and finished only six seconds behind Corbin and 26 seconds ahead of Acker.

Corbin, 23, was elated for many reasons; he had never beaten Acker in a long race before, plus the fear of losing to a woman – albeit an elite runner – would have generated too much teasing in his family circle.

“It was a tough 13 miles and the last straight was even harder, I’m happy to have come out of the other side a winner,” Corbin said.

He did not have to push much early on in the race as he let the 43-year-old South African determine the pace, but Corbin admits the last 700 meters was excruciating.

“I was clear of Marius, leaving me to assume I had the win, but Gabriele came out of nowhere. She was 400 meters away from me; 30 seconds later, she was 50 meters.

“I could see the finish line, all that was going through my mind was putting one foot in front of the other and getting a decent heel lift.

“Posture, breathing, everything went out of the window. I could not lose this race to someone else after finally edging Marius.

“I know my soon-to-be father-in-law wouldn’t let me live it down, which gave me the edge I needed for the last 100 meters.”

Corbin derived immense satisfaction in beating Acker in an event he previously dominated.

Corbin did not have much pain in the knees during the race, which he credits to the work of physiotherapist Tenson Edmunds from the Chrissie Tomlinson Memorial Hospital. Although heavily strapped up, it was never an issue.

“Only a month before, I thought I’d have to pull out of the race but Tenson helped get me back to fitness.”

Thanks to the brilliance of event organizers Kelly Holding’s Rhonda Kelly, Laurie-Ann Holding and Bev Sinclair, the event never suffers growth pains. Their attention to detail and efficiency means that their reputation grows exponentially, which is why roughly a quarter of the entrants are from overseas, a remarkably high percentage considering the cost factor and time of the year.

“The event is always well organized and a big thank you to all the volunteers who woke up at 3 a.m,” Corbin said.

He is a computer technician for Cayman Free Press, so enjoyed extra encouragement from the Caymanian Compass water stop.

“The water stops helped out immensely. It’s a long run and you need the support and encouragement from them to keep you going. The Compass paparazzi stand took some good shots and gave me the encouragement and boost I needed for the last mile and a half.

“My biggest contributor for me winning this race is Craig Noble from Anytime Fitness. We discussed competitive racing, strategies, training plans, basically cramming in as much of his experiences into my novice year and a half of running and it worked.

“I’ve been training hard at Anytime Fitness and improving my core with Tribe. James Murray has given me useful advice to work through my injuries, running posture, training to help me transition to long-distance running.”

Corbin will be running the PAWS two-mile chase on Jan. 4, but for the rest of this month he is undecided.

No Cayman marathon is complete without seeing the familiar gait of Derek Haines ambling around. Even at age 65, he is fast enough to beat many in the sweltering heat and this time he finished in 4:18:26.

There was a competition to see who could guess Haines’s time and Eileen Phipps was the nearest with 4:18:22.

“The run is always hard but better than last year when cramps were much worse,” said Haines, who was spurred on by the crowd calling his name.

His highlight was, of course, finishing and he also enjoyed a police motor cycle alongside as an escort.

“Having fellow Rotarian chums Chris Johnson and Rob Jamieson encouraging me over the last five miles helped. They also made me carry the Rotary banner for the last half mile and over the line.”

Haines admitted that he hit the wall at around the 20-mile mark when he was still on target for a sub-four hour finish. “The cramps then really bit at four miles out and it took me 56 minutes to get in from there.”

He has raised more than $250,000 for charities over the years and this time Feed Our Future is the grateful recipient. He has about $32,500 pledged so far and a few forms still to collect so will well exceed the $30,000 target.

“The marathon gets better every year and I congratulate the organizers and volunteers for a well-run event. The Indians were my favorite water stop. They really shout encouragement at me and just edged it over the United Nations.”

The only way Kelly Holding can improve the event, according to Haines, is to arrange for cloud cover for the daylight part of the run.

British Bulldogs won the team event for the third consecutive year in 2:59:29

Corbin ran the first leg before going on to win the half marathon before Neal Ainscow took over. Tom Gammage ran the third leg and Derek Larner the fourth.

“We were not pushed this year compared to last year when the nearest teams were much closer,” Larner said. “It is difficult to run really quick when out on your own, plus it got quite hot by leg 3 and 4.”

He was also impressed with the overall organization. “The event has grown significantly over the years and I think this year was just as good as previous years.”

Larner coaches some of the fastest kids in middle-distance running and he was pleased to see them win the mixed-team relay, coming in second place overall.

“They are getting stronger and faster every year and maybe next year they can beat the Bulldogs. “Many thanks to Bodden & Bodden for sponsoring our two youth relay teams.”