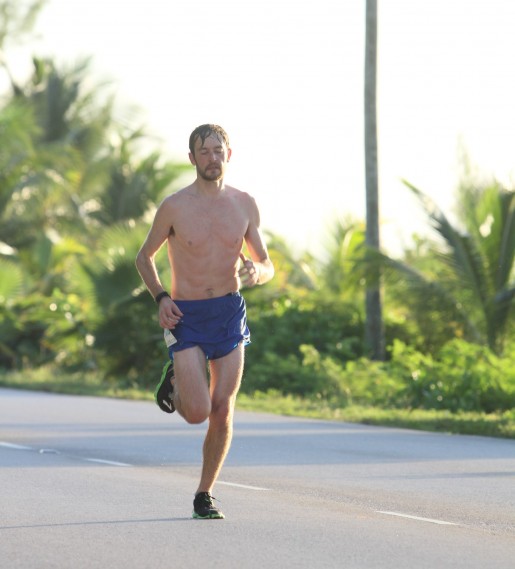 Marathon races are enjoyed not only by the swift and super-fit, they give a chance for first-timers and casual runners to test themselves in a gruelling event, too.

More than 1,300 entered the Intertrust Cayman Islands Marathon in the 26.2-mile full race, half marathon or four-person relay and many of them were novice runners.

Despite the blazing morning heat, there were no serious complaints. The scenic beauty of the course is one factor why overseas runners come back every year.

The marathon was won by American Justin Grunewald from Minneapolis in 2 hours, 42 hours and 38 seconds, with Steve Speirs from Virginia second in 2:56:18 and local runner Chadwick Webster third in 3:05:02. Fastest marathon woman was Doan Pham from Houston in 3:42:51.

British Bulldogs won the team event in a course record 2:51:29.

April Panton was a typical newbie to this super event organized by Kelly Holding team of Rhonda Kelly, Laurie-Ann Holding and Bev Sinclair.

Panton went from non-runner to half marathon debutante in only a few months. Hobbling at the end of the 13.1-mile event on Sunday, she nevertheless enjoyed the overall experience, which started at Breezes by the Bay on the waterfront, along South Sound and up to Prospect Point and back. Two loops for the marathon runners.

Her knee gave out around mile 7 and that increased the challenge. But determination to finish kept Panton going at a pretty good pace until near the end and then her knee simply would not bend anymore, so she was sort of hopping along with little running steps in between.

“I got a massage and stretched straight after, which really helped,” Panton, 43, said. “I also stopped and stretched along the way a couple times to help my knee.”

Her main goal was to complete in under three hours, which was achieved in an official time of 2 hours, 53 minutes and 50 seconds.

“I believe my running chip timed me at 2 hours and 51 minutes. Either way it was a great experience and a good time for my first time participating in something like that.”

The absolute relief of crossing the finish line was her best experience, however, enjoying the water stops and all the cheering went a long way as well. “That really gave me the boosts needed to keep going.”

She intends to do the half marathon again and hopes that next time the race remains on a paved surface. “It was a little difficult to see down Old Prospect Road. There were a few pot holes there which always make me a bit nervous and trouble my knee.”

All her friends and family enjoyed their experience too in their first participation.

Not put off by the pain, Panton will be running in the Jingle Bell fun run this Sunday.

Winner of the Caymanian Compass ‘Strike a pose’ competition at the paper’s red carpet water stop was Marlon Crowe Jr.

Roughly a third of the total entrants were from overseas with Team Diabetes easily making up a huge portion of 89 runners.

One couple from North Carolina, Matt and Amy Ketterman, ran the half marathon together. Matt is a stickler for routine. He has a streak of well over 8,000 consecutive days running without missing a day. It started on July, 1, 1991.

“Sunday marked just another day, but was significant since I was able to come run the half here in the Cayman Islands with Amy,” he said.

She ran her 12th half marathon of the year to complete her goal of celebrating her 40th birthday. “We couldn’t have done this in a more beautiful place,” Matt said.

Marius Acker had made the Cayman Islands half marathon his property, winning it six of the past seven times. Two years ago, he arrived seven minutes late for the start and finished fourth although he ran the course the fastest.

Acker was third this time though, missing out to Dominic Corbin and female runner Gabriele Grunewald.

A place in the recent Chicago Marathon had to be missed by Acker because of injuries. He was hampered for Sunday’s race for the same reason. “I was in better shape in previous years when I ran six days a week,” he said.

“I was forced to run only three to four times a week over the last four months due to injuries. If I ran more the injuries would return and I would not be able to train at all.

“This was the first year that I ran with someone all the way. I knew Gabriele was aiming to win the race overall and I also knew that Dom would not be willing to make the pace for the race. I was not always ahead in this race, the lead changed a couple of times.”

Acker did not need to adjust his pre-race plan and tactics during the race as it was a very predictable run, apart from David Walker who appeared “like a phantom just before halfway”.

Corbin went through halfway 10 seconds ahead of Acker and so did Walker. “I was very surprised to see Walker as I did not know he was training. Dave started to run away from me just before halfway and Dom followed him. I went through halfway third on the day which never happened before. Dave lead the race for about a mile and a half before I caught up with him.”

Walker slowed down and it was just Corbin and Acker until mile 12 when, Justin Grunewald, the marathon winner, passed them.

“I sensed that Dom was not breathing heavily and I told him to try and pace with Justin instead of staying with me. I was aware that Gabriele was chasing us and I wanted a local to win the half marathon. Dom was not aware of this. Justin paced Gabriele for most of the race and I knew she would have a strong finish.

“Dom’s race tactics was no surprise to me. He ran a very predictable safe race without taking any risks.

“I decided before the race that I will be running my own race and not sit back with her and Justin in a bunch as I knew that she is a 1500m runner and could outrun me for the line if we were in a bunch close to the finish. Gabriele was very close to accomplishing her goal of winning the half marathon. She finished six seconds behind Corbin.”

“The target is off my back now and it is good to go into the 2014 race with no pressure on me to defend my title, if I am granted residency,” Acker said.

“The water stops was really a highlight and thanks to all the volunteers for coming out to support us and cheer us on and also the organizers who did a splendid job.”

The Mercuryman Half Ironman Triathlon on Jan. 19 is the next event he is considering. “A podium finish behind the visiting pro athletes would make for a great start to 2014.”

Find your picture and tag yourself in our 1,000 marathon photos at: facebook.com/caycompass